As the clubs who want to form a Super League focus on their economic futures, they find themselves a

As the clubs who want to form a Super League focus on their economic futures, they find themselves attacked on all sides for being at odds with football’s past.

“Created by the poor, stolen by the rich,” read one banner held up by fans outside Manchester United’s Old Trafford stadium on Monday. It summed up the frustration that has been gripping most football followers since the plans were announced.

UEFA president Aleksander Ceferin said the proposed closed breakaway league was “a spit in the face” of “football lovers”.

“Everyone is united against this disgraceful, self-serving proposal, fuelled by greed above all else,” he said.

Despite the opposition of their own fans, national governments and the football authorities the 12 clubs are pressing ahead.

They represent just seven cities in three countries. Six are from England and three each from Spain and Italy.

The suspicion of fans that the clubs are losing touch with their roots is amplified by the foreign ownership of the majority of the rebel clubs, in several cases through faceless holding companies.

But the greatest suspicion is that the proposed league is part of what French football historian Paul Dietschy called “the Americanisation of the world”.

Four, Liverpool, Manchester United, Arsenal and AC Milan, are owned by Americans or companies based in the United States.

Of those, three own franchises in major US sports.

There is also an American influence at Juventus. The club has a long association with Fiat, now part of American-Italian group Stellantis. That company’s American president John Elkann, a grandson of former Juventus owner Gianni Agnelli, appointed his cousin Andrea Agnelli to run the club.

The proposed league is being underwritten by American money, in the form of a four billion dollar (3.32bn euro) loan from Wall Street bank JPMorgan Chase.

As long ago as the 1950s and 1960s, research by American economists showed their clubs were “profit maximisers”, while British economist Peter Sloane found that football clubs in the English league were “utility maximisers”, motivated by non-financial considerations.

“American sport has historically been very focused on profit,” said Chris Winn, a researcher at the University Campus of Football Business, which has links with Manchester City as well as Premier League Burnley.

“It’s no coincidence that there is a core American group at the heart of these Super League proposals. The European football elite are looking for a guaranteed piece of the pie every year.”

Dietschy told AFP that the clubs no longer wanted to be anchored in their local landscape.

“These clubs are becoming brands and as they target other markets,” he said. “It’s counter-intuitive when you think of football, but it can work like the American franchises.”

But, Dietschy cautioned, “we must be wary of romanticism applied to football. The richest have always dominated. What has changed, however, is that today money is no longer used to win but to make a profit.”

Yet some elite players, who stand to share that profit, are outraged.

“I believe in an improved Champions League, but not in the rich stealing what the people created,” said Paris Saint-Germain’s Spain midfielder Ander Herrera

“The rich have stolen what the people have created,” Manchester United’s Portuguese player Bruno Fernandes posted on social media. “Dreams cannot be bought.”

So far the Super League has not attracted any clubs in the key market of Germany.

Bayern Munich and Borussia Dortmund have both taken a public stand against the plan.

“I would like to make it explicitly clear that FC Bayern will not be taking part in the Super League,” said club chairman Karl-Heinz Rummenigge in a statement on Tuesday.

Like Barcelona and Real Madrid, the two Bundesliga giants are fan owned, but German supporters have long been vocal defenders of football traditions.

Bayern is run by German former players in contrast to the Super League clubs.

“The directors of these clubs are people trained in top management schools, and their logic is that of business and profit,” said Dietschy. 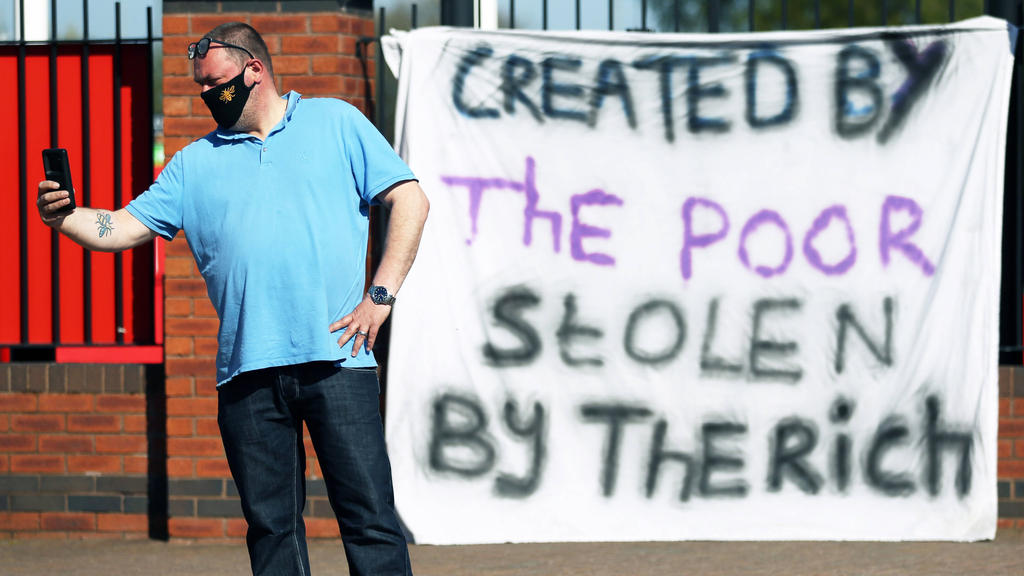